The poet Marinela Reka once wrote, “being a daddy’s girl is like having permanent armor for the rest of your life”. One could easily dismiss this saying at the romantic musings of a nostalgic writer. However, trends in research suggest that Reka may not be too far off in her assertions. Close relationships between fathers and daughters is a lifelong protective factor for women.

According to a study by Linda Neilson from the Institute for Family Studies, “A girl who has a secure, supportive, communicative relationship with her father is less likely to get pregnant as a teenager and less likely to become sexually active in her early teens.” This is largely because young women with positive paternal role models tend to focus on academic achievement before reaching romantic milestones. They wait longer to marry and have children, and tend to enter more demanding, more competitive, and higher paid career positions, typically held by men.

Research also demonstrates that well-fathered girls go on to have healthier, longer lasting relationships with men in their adult years. In college, they are less likely to turn to their romantic partners for emotional support, and are reported to be more independently functioning. In fact, fathers are reported to have a more significant influence on daughters than mothers do, where romantic relationships are concerned.

Furthermore, well-fathered daughters tend to have higher self-esteem, lower rates of eating disorders, and are less likely to experience clinical depression. Moreover, research indicates that women who experienced negative paternal relationships during childhood had lower than normal cortisol levels. According to Neilson, “people with low cortisol levels tend to be overly sensitive and overly reactive when confronted with stress.

With these factors in mind, it does, in fact, appear that “being a daddy’s girl” is a sort of armor for women, it allows them to go further in life, and imbues them with a sense of independence and self esteem that allows them to compete with men, privilege and all, in the workplace.

What it does not protect against is sexual assault.

Every 98 seconds, someone in the United States is sexually assaulted. 90% of these victims are woman or little girls. The prime window for assault? Ages 12 through 34. 69% of sexual assaults and rapes occur within this time frame.

For reference, this means that the 1 in 5 women who experience sexual violence will most likely do so between learning to drive, getting their first jobs, being accepted to college, dating in their 20s, getting married, buying their first homes, and having their first children. Unsurprisingly, even after “aging out” of this window,  they are still not safe from the looming shadow of the predatory man. 28% of sexual assaults occur between the ages of 35 and 64, and elder abuse does not restrict itself to neglect; a reported 3% of women above the age of 64 experience sexual violence.

“As the Father of Daughters”

Actress Alyssa Milano was the first to use the phrase #MeToo (coined in 2006 by Tarana Burke), as a form of retaliation against her attackers. On October 15th, 2017, she tweeted 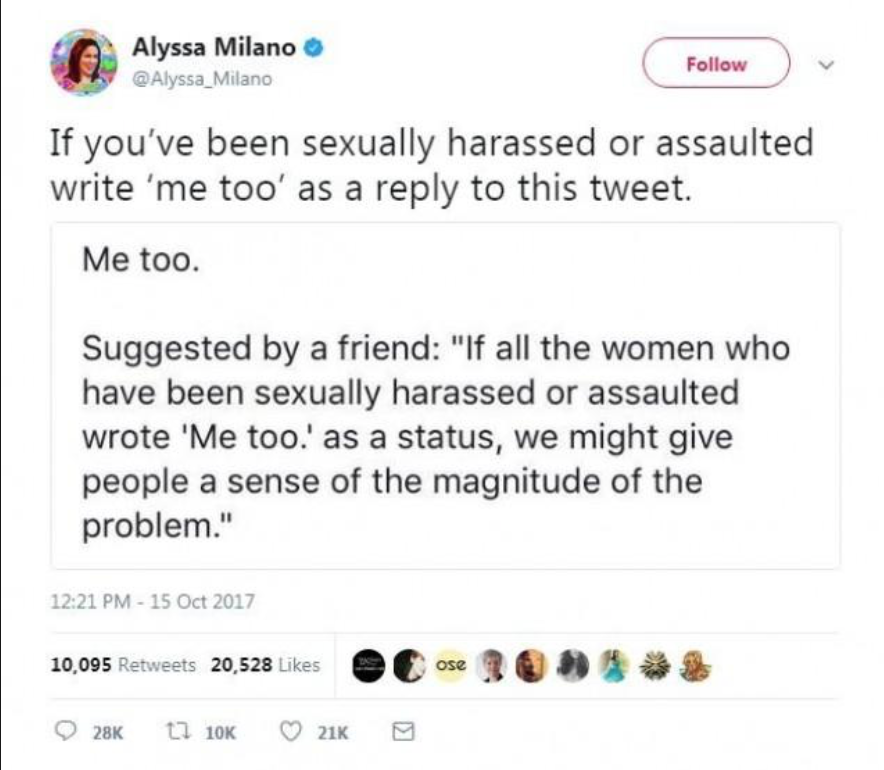 The hashtag took the world by storm. Within 24 hours, 45% of Facebook users in the United States had at least one friend who had posted the phrase.

Many were shocked at the sheer magnitude of the crisis, not only in Hollywood, but in their own communities. Among the most taken off guard? Men.

As the #MeToo movement grew too far reaching to be ignored, male celebrities began to speak up, offering their support to women all around the world. Their phrase of choice? “As the father of daughters”.

“As the father of four daughters,” movie star Matt Damon said in an interview, “this is the kind of sexual predation that keeps me up at night.” Mitch McConnell, Senate Majority Leader echoed this sentiment, proclaiming as part of his presidential campaign, “As the father of three daughters, I strongly believe that Trump needs to apologize directly to women and girls everywhere.”

While women were typing out “#MeToo” fathers were just as quickly sending messages beginning “As a father of…”, insisting for change on behalf of their beloved daughters. They told their little girls to dress conservatively, to watch their drinks, and to never go out late at night alone, as if these were the only instances in which sexual assault could occur.

Not That Type of Girl

What Graham did not account for in his statements, is the fact that the majority of sexual assaults are committed by men that their daughters already know. 77% of perpetrators are husbands, boyfriends, acquaintances, all trusted individuals in their children’s lives. Furthermore, most rapes are not at gunpoint in darkened alleyways; only 11% of rapists use weapons other than their hands or feet during the act of violence.

Moreover, contrary to the belief that sexual assault only happens to a “certain type of girl”, this is only true if that type is: “every girl”. Sexual assault does discriminate. It targets poor girls, rich girls, white girls, black girls, brown girls, non-conforming girls, gay girls, bisexual girls, trans-girls…the list could go on.

And because it must be stated, college education is not any more of a protective factor than “putting on a longer skirt” is. 1 in 5 college students report sexual assault, a number identical to the population outside of college. In some instances, this number may be higher, because approximately 54% of sexual assaults go unreported, and in any given instance, only 50% of a college student’s peers will believe her story, despite the fact that only 2-8% of reported rapes are false claims.

This is why when men began to offer their ally-ship with the phrase, “As a father…”, many women rejected their offer. Was the only way men could relate to the #MeToo movement through their daughters, whom they viewed as an extension of themselves? The phrase suggested that it was only as a relative of a victim or potential victim that one could come to be concerned with the #MeToo movement if they were not a woman themselves.

Those statistics that so moved so many fathers to voice their support for woman were not at all shocking to their daughters. If anything, it made them wonder how their fathers could be so ignorant to a reality that they faced everyday of their lives. Today, it makes many women view men, even well meaning ones, with reprehension. How could they be so clueless? Lauren Vinopal, a journalist writing for Fatherly, offered her own insight to this dilemma.

In her article “My Dad is Clueless About Sexual Assault Because I Haven’t Told Him About It“, Vinopal documents her own fears surrounding sexual violence, which, as she writes, is only worsened by the fear that her father may find out that his well-intentioned advice means nothing in reality:

“As a daughter who loves her father, I’ve taken steps to protect him from the truth about my safety (or lack thereof). When I moved to New York, I didn’t tell my dad about that time the cops knocked down my neighbor’s door accusing him of rape. I haven’t told him that I’m regularly followed, or that I have been harassed and physically harmed by men. Because neither of us can do anything about it. I shield him because I love him. If he really knew that it is a liability for me to merely exist as a woman, it would break his heart.”

Rennicke’s own Dan Wolfson, Psy. D spoke to Vinapol about this contention. Dan told the journalist “It’s a protective mechanism, whether it’s to protect yourself or the parent in the relationship […] this protection is really working against you.” According to Dan, it’s crucial for parents to encourage their kids to confide in them and not shield them from their trauma.

What’s A Daughter to Do?

While it may seem to children that their parents know everything, they do not. By the nature of living separate lives and having separate experiences, fathers cannot know what their daughters do so well; the reality of the trauma they face in their everyday lives. Just as parents are tasked with educating their children to the best of their abilities, daughters must educate their fathers, as to shine light on the dangers that surround them (to no fault of their own).

While it is not a woman’s role to play informant to men–be they fathers, husbands, or friends– the unfair burden of responsibility has fallen upon their shoulders. They must be their own advocates. It stands now that in order to stop violence against themselves, women must share their experiences. The #MeToo movement only proves this.

They must rid themselves of the fear of stigmatization–the fear of breaking illusions and their fathers’ hearts, and they must share, unabashedly, their fears, their concerns– their experiences. They must force the world outside of womankind to pay witness to their persistent distress.

Perhaps if the truth of sexual assault is revealed, men will come to see the world as it is; an unsafe place for their daughters and all women. Perhaps then they will learn to hold their tongues when telling their little girls to wear a longer skirt, or not stay out too late. Perhaps then, fathers of sons will direct these instructions to their boys, to tell them that the length of a skirt is not an invitation. That the hands on a clock are not a permission. That there is no excuse to make any person, female or male feel unsafe in their own body, or in this world.

All this considered, perhaps when, in future generations, a man is asked to speak on sexual assault, he will begin with “As a human…” and not “As a father…”

If you or someone you know has been the victim of sexual assault please speak to someone. 24/7 support is available at from the Rape, Abuse, and Incest National Network (RAINN). To speak to a specialist, call 800.656.HOPE or  Chat Now with some who can help.