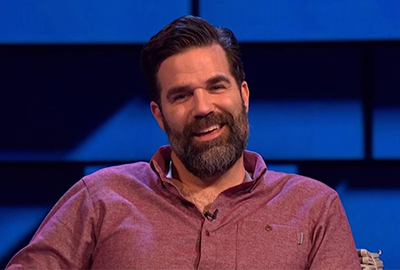 I mindlessly clicked on this clip of the British talk show The Russell Howard Hour as a fan of Catastrophe, the acerbic and tender Amazon series about a couple brought together by a brief affair who end up starting a family together, and am still in reeling. In this segment, Rob Delaney, the co-creator and co-star of the series is on a typical press junket to promote the final season of the show, but what he ends up discussing is the death of his young son, Henry, from brain cancer earlier this year. No one generally knows what to say when someone dies. When a child dies, the wordlessness abounds.

What is remarkable about Mr. Delaney’s interview is his capacity to let his grief organically unfurl by naming the horrors and joys and sense memories of his son as they come to him. He does not censor himself and through his clarity of the magnitude and unwieldiness of his experience invites the interviewer, and us as viewers, into his truth about his grief. He is always thinking about his son, so if you don’t know what to say ask about Henry because it gives whatever bands of blackness or light that are arcing through him in that moment a chance to be said out loud. I don’t know what “positive masculinity” is exactly, but I know for me Mr. Delaney’s expression of love and grief transcends it and exudes the beauty of humanity.